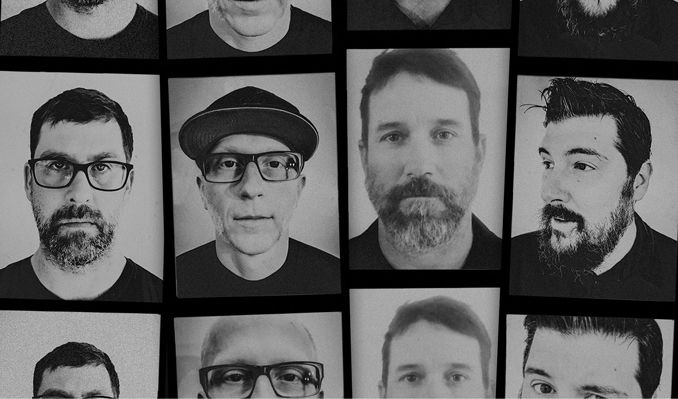 Hot Water Music. Those three words describe more than just a band at this point, they describe a way of life. Since forming in Florida in 1994, the act have constantly reinvented themselves by combining elements of punk rock and post-hardcore over the course of eight full-lengths, countless vinyl releases and energetic live shows. However instead of taking a victory lap in celebration of their current 25th anniversary tour – which sees them playing their celebrated 1999 fan-favorite No Division and 2002 commercial breakthrough Caution in their entirety – the group marked the occasion by recording five new songs for the Shake Up The Shadows EP, which sees the band – guitarist/vocalists Chuck Ragan and Chris Wollard, bassist Jason Black and drummer George Rebelo – crafting some of the most impassioned music of their career.

Recorded at Black Bear Studios in Gainesville,with the band's live sound person Ryan Williams (who also produced their 2017 full-length Light It Up), Shake Up The Shadows is a truly collaborative effort despite the fact that Ragan is currently based in California where he owns a fly fishing operation. “George and I would write a lot of music and then we would send it to everyone and see what would stick as far as what they wanted to sing on,” Black says of the songwriting process. “Chuck and Chris would also send us their song ideas and we basically just combined all of our contributions into what's on the EP.” From the inspirational opener “By Any Means” to the more self-reflective, Wollard-fronted “Denatured” and closing call-to-arms “Afar And Away,” these songs show the band continuing to break new sonic ground. Bringing this full circle is the fact that they also feature backing vocals from the band's touring guitarist/vocalist Chris Cresswell of The Flatliners.

The influence of the members' other musical projects, including Rebelo's gig as the drummer for The Bouncing Souls and Ragan's more folk-oriented solo career, are also present on Shake Up The Shadows and this fact is most evident when it comes to Ragan's vocals. “I've never stopped singing or performing and along with that comes learning just how far I can push things,” he explains. “When I'm recording these days I'm really trying to tap into how I'd want to sing it live because I need momentum in order to capture that energy.” Ragan credits Williams with helping to bring that emotion out of him on this EP, explaining that the band were careful not to overthink their approach in the studio. “Chuck's voice really impresses me with these songs, which isn't easy after playing together for so long,” Black admits.

While Hot Water Music have never been an outwardly political band, lyrically Shake Up The Shadows sees them expanding on the themes of unity and togetherness that lie at the core of albums like No Division. “When we were listening back to the No Division songs for this anniversary tour, we were kind of surprised that we all instantly felt connected to them and they felt a lot more relevant to us now than they have in a long time,” Ragan explains. “I think we're living in a really volatile and terrifying time where people are turning a blind eye to the hatred that's happening in this world and thinking of themselves rather than the big picture. I think that sentiment is present in these new songs the way it has always kind of been there in our music. If anything we've always felt like we're either the underdog of we are rooting for the underdog.”

In that spirit, the melodic “Rebellion Story” reinforces the importance of community and rallies against the toxic mentality of entitlement and privilege that some people feel when it comes to where they're from or the color of their skin. Alternately on a more personal note, the anthemic “By Any Means” was inspired by watching the resolute recovery of one of Ragan's clients who was battling cancer. “Being around someone and watching the way they were fighting back against this disease really made me realize that the human spirit is just incredible; coupled with a support group, it's amazing what you can get through,” Ragan explains. “That song is simply about setting your goals and working toward them by keeping your chin up no matter what is trying to kill you.”

After grinding it out on the road for over two decades, Hot Water Music have finally reached a place where they are comfortable with who they are and the fact that they can operate the band on their own timeline without worrying about album cycles or endless tour schedules. “It's kind of cool to be still learning more about the band after twenty five years and the dynamic between the four of us is really fun and mellow in the sense that things aren't so hard anymore,” Black explains. “This milestone is really important to us because we never had any idea that the decisions we were making when we were younger would dictate the rest of our lives,” adds Ragan. “The thought of putting some songs together turned into a career and later that turned into a community – and we didn't do it alone, we've had all these other people supporting us along the way.

“Celebrating our 25th anniversary isn't self-congratulatory,” Ragan summarizes. “It's the band saying, 'Look at what all of us built and let's celebrate that.'”

AmazonTwitterYouTubeFacebookOfficial WebsiteMySpace
*Service and handling fees are added to the price of each ticket.
Get Tickets