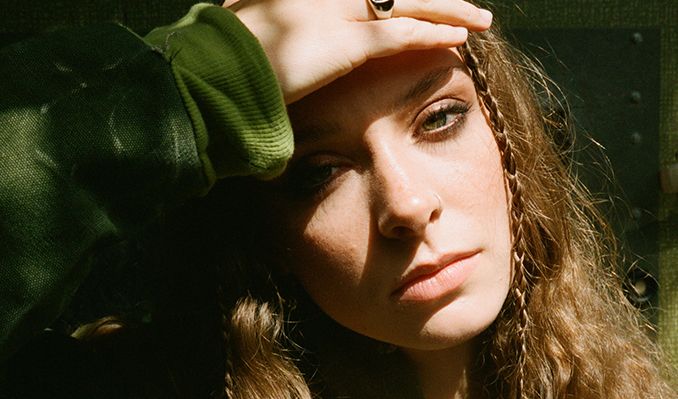 “This EP represents a feeling of being lost. It’s the kind of lost that makes you question who you are and where you belong. So lost that someone might need to find you again because you can’t find yourself. That’s how it felt to move to Liverpool, then London, and be in transit between cities and never settling”.

Holly Humberstone’s childhood home is your quintessential spooky, strange house. Formerly used as servants quarters for a nearby castle, it’s now crumbling down around the musician’s family. Like most unusual houses of its ilk, its most intriguing parts – save for the hordes of old violins Holly’s dad has lying around the place – are in its subterranean layers. There’s a dungeon and a room full of meat hooks, and a climate so damp mushrooms grow out of the walls. Friends find the whole house so creepy they’ve been known to make excuses to avoid sleeping over there.

“Loads of people have probably died here in the past but I’ve always felt really safe here,” Holly shrugs. “It’s like a seventh family member. It’s part of me.”

If the house is a big part of the 21-year-old’s identity, it’s no surprise it’s had a big impact on her music too. Hers is a sound that belongs to the night, moonlight flashes and twilight tinges occupying her genre-blurring songs, which take influence from the likes of Bon Iver, Damien Rice, Frank Ocean, Lorde and Phoebe Bridgers, but stand alone in their own distinctive world. Her debut EP ‘Falling Asleep At The Wheel’ was written at her home and imitated the sounds of the house – packed with distant buzzes, ethereal echoes and wonky, warped glitches.

For Holly, the family digs have always been a place where she can experiment freely. “The whole house is a creative mess,” she explains. “I always felt like it was a really safe space to be creative. You can go outside and scream and no one will hear you. My dad’s a big poetry lover and he’d put his poetry books in front of me and I’d make up little songs. It’s just a really inspiring environment. I feel like I make my best stuff when I’m here.”

Last summer, the family were told that they wouldn't be able to live in the house anymore because it was becoming so dilapidated. The news followed a period of big changes in Holly’s life, from finishing school and heading off to uni only to hate her experience, the end of a relationship, and having to say goodbye to a loved one. “I just felt like all the special bits that I was really trying to hold onto from my childhood that were really precious were getting away from me,” she says.

The idea of having to leave her childhood home for good soon inspired one of her best songs so far. ‘Haunted House’ finds the young musician saying farewell to the extraordinary residence and paying tribute to its impact on her life. “Bringing up four daughters made this house a fortress,” she sings over plaintive piano, later pleading: “Don’t say that I’m leaving/ In the morning, let me lie here with you.”

Writing her second EP – which opens with ‘Haunted House’ – helped her to come to terms with the shifts that were happening in her life. It first began to take shape in the pre-pandemic days when Holly would visit her friends and sisters in Manchester, revel in big nights out and then get the train back to wherever she was living at the time, feeling worse for wear.

“On those train journeys I had loads of time to confront how I was feeling because I had nothing else to distract me from it,” she says. With her hangovers preventing her from being able to filter her thoughts, she began to write ideas in the Notes app on her phone and record little voice memos that would form the genesis of her second EP.

The record not only processed the changes that were happening around her but helped her find her way out of situations. ‘The Walls Are Way Too Thin’ details her experience of moving to London and taking a room in a flat with people she’d never met before. Far from the sanctuary of her family home, she found it to be an uncomfortable situation, living in “a really dodgy, really small” space with no privacy. “How come it rains inside?/ The house is full but I’m alone,” she sighs over creeping electronics and bright guitars.

‘Scarlett’ is named after Holly’s best friend and looks back at the musician helping her through a break-up. On ‘Please Don’t Leave’, meanwhile, she teamed up with The 1975’s Matty Healy to create a song built for sleepless nights playing over the highs and lows and what went wrongs of a relationship. Working with Matty, she says, was not only inspiring but helped her dispel some of her self-doubts. “I have imposter syndrome and I don’t feel like I should be doing this job sometimes,” she explains. “Working with someone I admire like Matty is reassuring and affirming. I must be alright at what I’m doing, I can trust myself.”

Storytelling is indeed an important part of Holly’s craft. She wants all her lyrics to be ones people could tattoo on themselves and she writes lines that are specific to her life, from her sister’s struggles with mental health to growing apart from her friends. “People can connect to a song more if it’s just me and my unfiltered thoughts,” she explains. “That’s what I look for in music that I listen to – a personal connection. Everything I’m going through is universal stuff. Everyone’s been through these situations, it’s not just me.”

The creativity in Holly’s work is also integral to her artistry. Her music videos and the short film ‘On The Run’ all link together, with easter eggs hidden throughout, creating a world around her. When she was invited to perform on The Late Late Show with James Corden earlier this year, she used the fact it had to be filmed remotely to her advantage and picked up the storyline once again, finding herself being thrown into the back of a police van for fictional crimes committed earlier in the tale.

Beyond music, Holly has already created the Fifth Sister Swap initiative as a way for her and her fans to get new clothes without relying on fast fashion. It’s an idea that stemmed from her and her three sisters constantly borrowing from and swapping their own wardrobes.

“I think growing up in a house full of females has made me really passionate about the stuff that’s important,” she explains. “Being sustainable and caring about climate change are going to be really important in my career.” She also cites women’s rights issues as making her realise the importance of using her platform to help make a difference.

With her inimitable brand of songwriting and visionary creativity, as evidenced on her stunning second EP, Holly Humberstone’s star will continue to rise long after the family home that raised her crumbles to the ground.

More Info
*Service and handling fees are added to the price of each ticket.
Buy Tickets